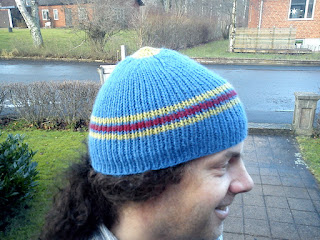 I must admit that the 'proper' Christmas-feeling did not make it's way to me, mostly because the NOT so 'Christmassy' weather. At least that is what I blame it on.
Anyway, we celebrated Christmas in Sweden - looking as above... Yet another 'El Hatto Negro' this time for my brother. It is a truly great pattern, but however much I extend it, it never seems to be enough. The hat 'draw itself together' when worn, so make it much longer than stated - is my advise.

During the holiday I got some knitting done - even though the finishing bits missing - weaving in ends and blocking... 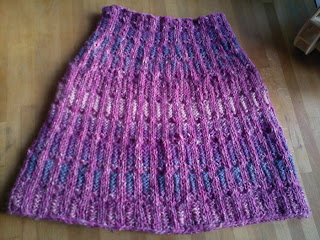 I followed the MESA ROCK pattern, but decreased 20 st three times to get a tighter ending. 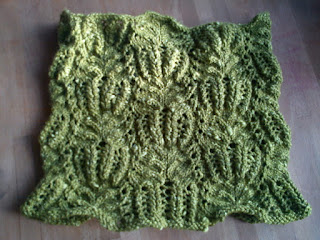 As I said: Still blocking to come...

Now I have Stolen Stitches cardigan Trilo on the needles. Fingers crossed for a lovely cardi. At least the yarn is - Manos del Uruguay Silk blend, colour Taurus.
Posted by Akhila's Handblog at 14:24